First Morning in the Stoneyard

I had trouble finding the stoneyard that first Monday morning, in spite of Sanchez’s instructions. When I came out of the subway station—the last on the line—Madrid had ended. The buildings stopped and all you could see were bare fields.

“About a quarter of a mile farther, you’ll see the lane to the left,” he had said. He might as well have mentioned the landmark mudpuddle just where the lane began because it was big enough to swallow a car. Except for a few wooden shacks where Gipsies lived and stockpiled junk, there was nothing at all in sight—no trees, no bushes, just a vast plain.

Far off to the left were the beautiful Guadarrama Mountains with streaks of snow on top, just as you see them behind King Philip and his family in the great Velazquez portraits in the Prado.

I hurried on along the lane. Where the devil was the workshop? It couldn’t have been much farther. I was carrying my little plaster figure and it was getting heavier and heavier.

It was the noise that finally told. It came from a big lot enclosed by a six-foot wall of broken bricks, with canvasses flapping in the wind above the wall, and an enormous metal gate. From a hundred and fifty yards I could already hear a hum; at a hundred yards, a big motor chugging, with hammer-clinking and a trace of shouting. By the time I reached the metal gate, the noise no longer seemed isolated as noise but had become a constant din.

I pounded on the big metal gate and pounded again harder. A little man with a Franco moustache for distinction but a wimpish smile that took it away opened up. It was Pepe, one of the men who would become my colleagues and my teachers. He seemed to expect me and led me across the yard without a word. A dozen men were working and singing and raising dust—the men I would soon get to know: Luis, Angel, Jacinto, Nicanor, and others. Each stood at his stone, which lay here and there around the yard, a-tilt in dunes of marble-chips. They had heard me in spite of all their own noise and they stopped, hammer in hand, to look hard. People of all kinds came through that gate all day and were good entertainment. Afterwards, when each of them had had his look, slowly, with dignity, and after pulling up trousers or rewinding the cloth around the blisters of his hammer-hand, he went back to his daydreams and his songs and hammered his stone or shaved it with his air-hammer-vibrating chisel. Stone splinters began to fly around and billows of white dust blew across the yard like clouds. 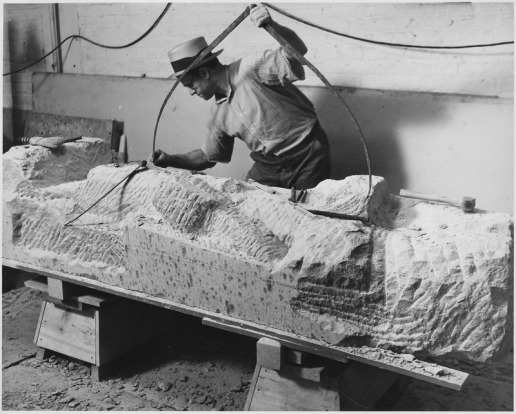 Fernando was up on the big stone drum of his capital again, and he came down when he saw me. “Put your figure on that flat rock over there and let’s have a look at it,” he said. He was covered with white dust and there were little stone chips in the pits of his eyes, which he didn’t seem to care about. I laid the figure carefully on the rock and uncovered it, proud and ashamed of it at the same time. It was one of my first figures. I had modelled it in clay in the room of the elegant residence where I lived, and then made this plaster copy, also one of my first. It was a lying bull—a Spanish fighting bull, of course. “So you like the bullfight, do you?” Fernando said, smiling. “What marble are you going to do it in? Black? Come over here.” (No comment on the artistic merit of the bull, of course. That didn’t concern him. A stab of disappointment for the artist.) 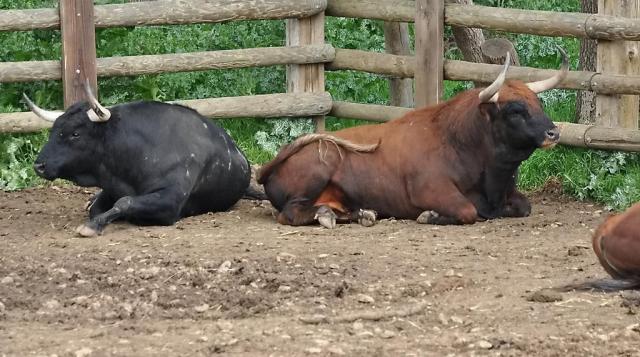 Fighting bulls from the  Baltasar Ibán  farm, waiting in Saint-Martin-de-Crau before the bullfight in Arles, France (photo CC-BY-SA by Alain MISTRAL)

We went to see a very irregular gray rock—I wouldn’t have thought of it as a block—lying on a sliding pile of marble chips. “How about this one?”
He found a piece of sponge, dipped it into a pail of dirty rainwater, then wiped the gray stone with it. That made a shiny black patch on the stone which like a window showed you what was inside. “It’ll get even darker than that when you polish it, but there you have an idea.”

When I bent down to take hold of the stone Fernando stopped me. “Let Pepe do that. You’ll get yourself a hernia.”
He called Pepe over and ordered him to carry the stone to a corner of the yard and to set me up to start. Then he climbed up on his rock again and I heard his air-hammer start up.

Pepe, the flatterer, made a fuss over my little plaster bull. “Torito,” he said, petting it and chuckling. “Le gusta España?—Do you like Spain?” And once he had set the gray stone on a table beside my model and kept it from rocking with wooden wedges, he assured me that when I was finished, I would like the black marble bull very much. “You’ll see,” he said with certainty. This, coming from a man I thought ought to know since he had seen hundreds of polished figures, was very exciting to hear. Pepe walked away then, his orders carried out. For a moment I had nothing to do but look around.

Next chapter: Watching a Sculptor

Chapter one: How I Learned to Carve Marble

1 Response to First Morning in the Stoneyard