“Do you like my workshop?” he asked me, introducing it with a sweep of his hand. He was teasing, challenging too. The place was completely unpresentable, even in the dark. Only two sides of the big yard were covered with a make-shift roof. And even they were open to the wind and blowing rain. Between the stone blocks the ground rose and fell in dunes of dust and stone chips. It wasn’t a workshop so much as a semi-permanent camp-site. And now, in the half-dark, it looked like a sort of abandoned cemetery. Fernando must have wondered whether I knew what I was in for. How easily will this kid get discouraged? Aren’t Yankees just big babies? He looked at me with a skeptical grin.

Behind him, hopping and jumping to reach the light cord were some kittens, a whole litter of them. They seemed to dance around him like fairies or elves. He walked over into the dark and reached up above his head. There was a flash as he twisted a big light-bulb deeper into its socket, and then a continuous light. “Mira,” he said. “Look.” 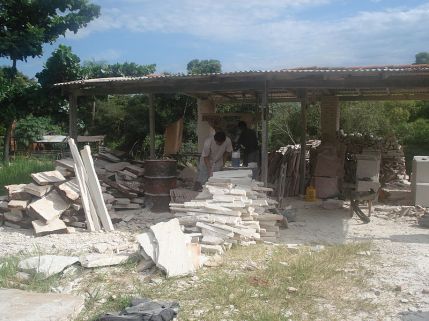 The wall was full of statues, stacked on massive wooden shelves that bowed under their weight. They were jammed in just any old way and covered with a quarter-inch of stone dust and soot from the campfire. Many of them were broken and crushed. In that condition it was hard to understand them or see anything pretty in them. Nothing in Fernando’s workshop looked like the sculpture I knew, of which there are two, of course. The first does all the recruiting for the second. The first I’d seen in Florence on the Piazza de Signoría, in the Uffizi and the Accademia. That’s the one you contemplate in museums and discuss over a glass of wine in cocky abstract language. It is the fresh flower picked off the bush. Fernando’s yard was the second, the bush (a thorn bush!).

The wiggling of the light cord had brought the kittens scampering over. They chased and fell on one another like little clowns in a slapstick act; and their chases ended in crazy little somersaults. They hopped up onto a stone as big as a table and began to play hide-and-seek around a reddish figure I hadn’t seen. It was a boy, nearly life-size, sitting on a little rock seat in sad reflection. He wasn’t like Rodin’s famous Thinker; he didn’t wedge his jaw into his hand and lock himself ape-wise into a rigid pose. Rather, he sat as if in a daydream, upright, one hand only grazing his face as though it were the caress of a mother; the other hand resting near his knee, perched as lightly as a bird. There was movement everywhere and yet the lad was still. He sat believably on the little stone and yet he seemed to have no weight, to be about to get up and run ever-so-lightly away. “This is really beautiful,” I said, walking around it to see if it was as good everywhere. Fernando watched me. It was his first opportunity to look at me while I examined the figure. I didn’t want to play the art connoisseur but I did want to let him know that I could spot a good thing.
“It’s an angel,” he said. “It’s for a grave. You remember”—he said the name of a famous politician who had died recently. “It’s for his grave.”

Here was sculpture of the first kind. It was better than anything I had seen by a living sculptor and was, I had to admit, better than anything I could do myself, though I hoped to do even better some day. All the details were modelled with the authority of a clear idea: nothing was done only as a copy of nature. It was all an interpretation, a style. That was probably its only defect: the style obeyed a kind of predictable canon of elongation and suppleness. Still, the canon worked: the angel was graceful, light, and deep. It had none of the grand style, none of the terribilitá of the figures in the Medici tombs, but rather the young grace of Verrocchio’s David.

“Do you know the sculptor?” I asked.
“Do I know him? I’d better: most of those figures are his”—pointing to the rubble of plaster statues on the shelves. I looked at them again but couldn’t see any as good as the red angel and said so.
“You can’t see them,” said Fernando. “Another day we’ll take some down and look at them right. A lot depends on how a figure is displayed. You should see how pretty they look in marble.”
“Have you made all those in marble?”
“Most of them more than once.”
“And this one?”—referring to the red angel. “What marble are you going to carve it in?”
“Carrara.”

Carrara! Michelangelo’s Carrara! It was the quarry in the hills near Florence which supplied him and all the great Renaissance sculptors with their marble. The Pietà, the David, the Apollo— almost all Michelangelo’s works were in Carrara marble. I didn’t dare tell anyone that Michelangelo was my model. I knew it would have sounded childish, affected or arrogant, ignorant or mad, so I kept it to myself; like the schizophrenic who is careful not to tell you that he is a beetle because of the bad impression he knows it will cause. Or rather, like the young actor who, to avoid noxious smiles, has learned not to say that he is going to be like Charlton Heston or Russell Crowe.

And now here was Fernando saying Carrara in this unlikely twentieth-century workshop as if modern sculptors still dreamed of the David and the Boboli Giants and ordered figures in Carrara because that was the only proper raw material for True Art, having been the Master’s.

“Does it really come from Italy?” I meant: Do you mean real Carrara marble? But the question came out deflected because I had been knocked off balance by the surprise.
“It had better, from what they charge,” said Fernando with a little gust of a laugh and a look at Sanchez. “It’s been coming in really bad the last few months. Grayish. Light gray with blackish streaks that are harder than the rest and bitchy when you cut into them.”
“Do you have the block for the angel?” I started to look around at all those boulders.
“Just hold your horses. It’s still in the almacen (warehouse). You’ll see it next week. And you’ll meet the sculptor too if you stick around.”

Italian pneumatic hammer, with a chisel. A rotation valve is added. (photo by Satrughna under free GNU documentation license)

I went over to look at the air-hammer, the first I had ever seen, and at the big chisels. “He wants to start already,” Fernando told Sanchez with a wink. The air-hammer was no hammer but a steel cylinder at the end of a black rubber tube, like a garden hose with its nozzle. I picked it up—like picking up a snake by the head—and Fernando handed me a chisel and showed me how to back it into the cylinder. “Just a minute,” he said and went to turn on the compressor. The great engine started up and made us all hard of hearing. Fernando came back and patted on the big drum of Colmenar stone in front of me. “Try,” he shouted. He twisted a little brass valve in the hose and the cylinder started vibrating. I aimed my forked chisel at the stone and slid the buzzing cylinder onto it. The chisel jumped and spun between my fingers. I saw you had to hold it tightly in place. Fernando waited to see if I would correct my technique without help, then intervened. He took the air-hammer and sort of combed or scraped the surface of the stone like a barber with his electric clipper who glides it over a boy´s head. “Venga,” he said, handing it back to me. “Come on.”
I made another sweep with the nozzle and the fork and plowed right into the stone. Some chips flew up. “That´s it,” said Fernando, smiling.

I was smiling myself. This was the right place, all right. I meant to stick around…

Next chapter:  my first day in the stoneyard, the men, the methods…